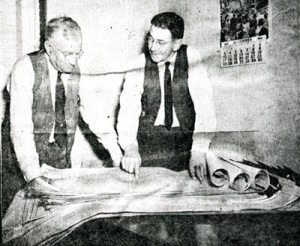 Henry Carlson Construction’s history began when Henry Carlson, Sr. immigrated to the United States in 1900. He began in the construction industry as a laborer and later worked as a skilled stonemason. With this construction knowledge, he joined with William A. Snitkey to form the Carlson-Snitkey Construction Company in 1919.

In 1924, Henry Carlson acquired full ownership and the company was renamed the Henry Carlson Company. The company grew rapidly and by the 1930s it was already considered one of the largest building and construction companies in the state of South Dakota. Under the leadership of Henry Carlson, Sr. the company began constructing many of the landmark buildings throughout the state.

Henry Carlson, Jr. first started with the company as a laborer in 1943. After serving in World War II he joined the company permanently in 1950. He took over as president following the death of his father in 1961.

"The remodeling team was very organized and did a nice job of staying on schedule. Karla and the rest did an awesome job and made this remodel experience an excellent one. No one was really stressed and the patient experience was great."
Cheryl Morgan Patient Access Supervisor, Sanford Dermatology