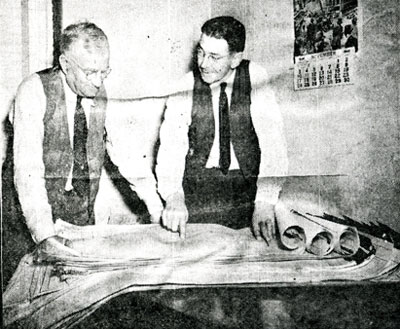 Henry Carlson Construction had a very humble beginning. Henry Carlson, Sr. immigrated from Sweden to the United States in 1900. He began in the construction industry as a laborer and later worked as a skilled stone mason. With this construction knowledge, he joined William Snitkey to form the Carlson-Snitkey Construction Company in 1919.
In 1924 Henry Carlson, Sr. bought out his partner and the company became The Henry Carlson Company. The company grew rapidly and by the 1930’s, it was considered one of the largest building and construction companies in the state of South Dakota.
Under the leadership of Henry Carlson, Sr. the company began constructing many of the landmark buildings throughout the state. Some of those include: Columbus College (currently the VA Hospital) in Sioux Falls, the historic Alex Johnson Hotel in Rapid City, the State Capitol Annex in Pierre, the original Washington High School, and the original Sioux Valley and McKennan Hospitals, both in Sioux Falls.
Henry Carlson, Jr.,the second generation of Carlsons, first started with the company as a laborer in 1943 and after serving in World War II, returned to the company in 1950. Taking over as president following the death of his father in 1961, Henry Jr. oversaw the construction of several large projects. Some of which include: the Sioux Falls Arena, the Airport Terminal Building, the Minnehaha County Courthouse (1963), Sioux Valley Nursing Tower and MB3, and the Public Safety Building, all in Sioux Falls.

Continuing in the family-owned tradition, Henry “Chip” Carlson, III, followed in the footsteps of his grandfather and father by joining in the family business as a carpenter’s apprentice in the late 1970’s. After receiving a degree in Construction Management, Chip joined the management team in 1982. Some of the more recent projects completed under Chip’s guidance include: Sanford Health MB4, Children’s Hospital, and the Heart Hospital, Vance Thompson Vision and Augustana Froiland Science Complex.
In 2017 the Henry Carlson Company became Henry Carlson Construction, LLC. Dave Derry is the chairman and Jerry Fromm is the president of the company.
"I have found Terry’s work ethic to be second to no one. He is extremely organized in his time management, courteous, and neat. Gifts that are not often found in others who share his occupation. My staff and myself knew exactly what was going on in each phase and was given ample time to prepare for the next phase."
Jo Tichota-Lee, Sanford Laboratories