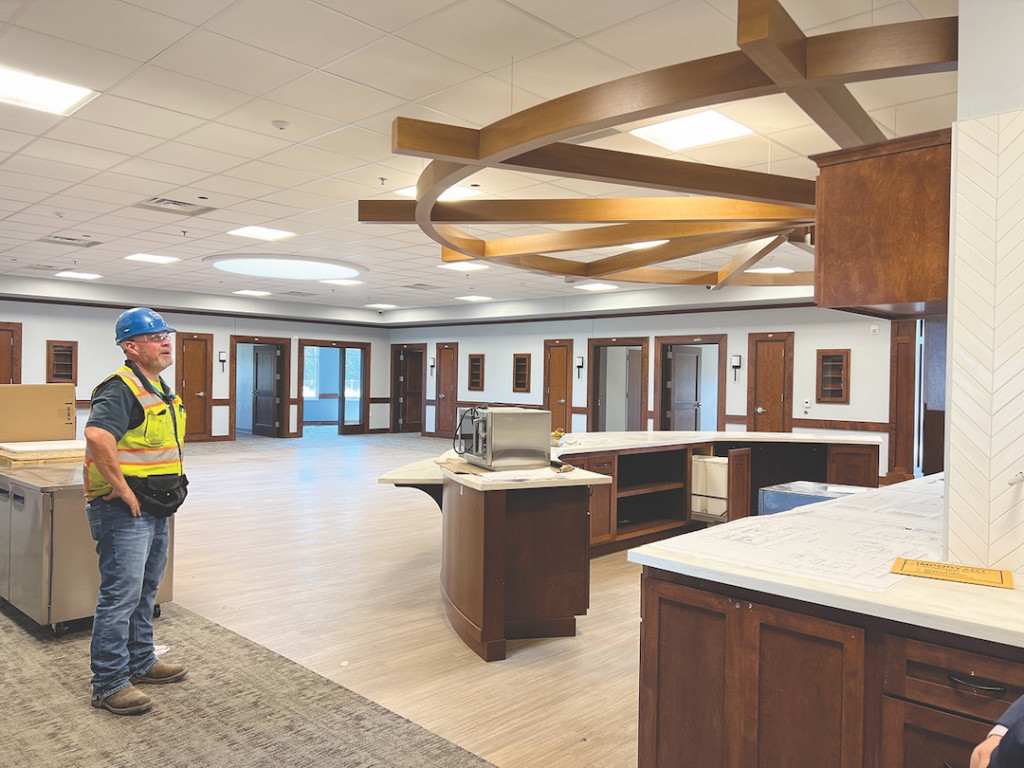 The new Flandreau Santee Sioux ‘Living Center’ is approximately 55,000 sq. ft. with a total of 42 rooms designed to care for those that are aging or in need of assistance and rehabilitation after illness or an injury. Fourteen of the rooms, the south wing, will be dedicated to memory care (Alzheimer’s etc.). The project broke Ground on November 4th, 2020 and took nearly two years to complete. Ultimately, even with the challenges of getting materials and COVID restrictions, tribal leaders say that the project came in under budget and ahead of schedule.

While construction has yet to officially wrap up, on the grounds especially at the new Flandreau Santee Sioux Skilled Nursing Facility on the southern edge of town, a Grand Opening celebration for the complex is tentatively being scheduled for mid-October. Tribal leaders, along with the design and construction teams that have been working closely on the project for the past several years, cannot wait for you to see what will soon be available to help care for you and your loved ones.

The approximately $30 million dollar facility offers 42 rooms. Each wing houses a kitchen and living area, a television room and other amenities along with 14 individual rooms — 13 of which are standard, one is a bariatric room with a lift. The facility will be open to both tribal and non-tribal patients for both short and long-term care. The goal is to offer anyone who may need it, a place to recover or live safely with the proper caretaking.
Tribal leaders are especially hopeful that it allows the aging or those with medical needs the ability to remain as close as possible to home and family.

“Culturally, the Tribal community places massive importance on the care and wellbeing of its Elders,” David Kills a Hundred, spokesman for the tribe, told the Moody County Enterprise. “There will be no such thing as an unimportant job at the Living Center.”

Hiring is ongoing at this time, more than 80 staff are needed with positions ranging from custodial staff to registered nurses. Fourteen of the 42 total rooms are dedicated and built specifically to care for those with memory needs.
Jeff McLaughlin, Construction Superintendent for the lead contractor, Henry Carlson Construction, could not speak more highly of the facility, the teamwork that went into the design, or the process to bring any of it to fruition as he offered a tour recently. Showing the thought that went into each individual wing, staff work space and room, from the materials used to how residents access linens, the shadow boxes outside the door, even the bathroom, “Look, here is your standard bath,” he said. “Even these are high-end features,” he added, pointing to the tile work in the shower and on the floor. “These are actually about as high end as you can get. Everything you see in this building is just high quality and there is incredible attention to detail.”

From the moment you walk in the door, you most likely will notice the incredible attention to detail. From the design, to the color patterns, natural light allowed in and all of the work spaces, everything was done specifically with the patient and caregiver in mind. The Moody County Enterprise will further explore the cultural significance of certain design elements in an upcoming issue — and not just of the indoor spaces. Outdoors, there are extensive walking paths, deliberate gathering spaces and other elements worth exploring.

“It’s been a heck of a teamwork concept. They (FSST) had a great design to start with, the design team transferred that onto paper and Henry interpreted that. There’s been a lot of…what about this, or what about that? It really is incredible,” said McLaughlin.

One of the outdoor elements still very much under construction, but worth mentioning, is a Veterans Memorial. The names of all of those who have defended the tribe dating as far back as 1892 will be memorialized in an impressive feature just outside of the main entrance.

“While the veterans have always held a place of honor within the hearts of the tribal community, the Tribe has never had a proper memorial for its Veterans. All warriors, past and present, took it upon themselves to protect our people. Placing their names on the memorial next to the Care Center, a facility designed to help and house those who may not be able to help themselves, felt like a proper way to honor them,” said Kills a Hundred. View the story on the Moody County Enterprise site.