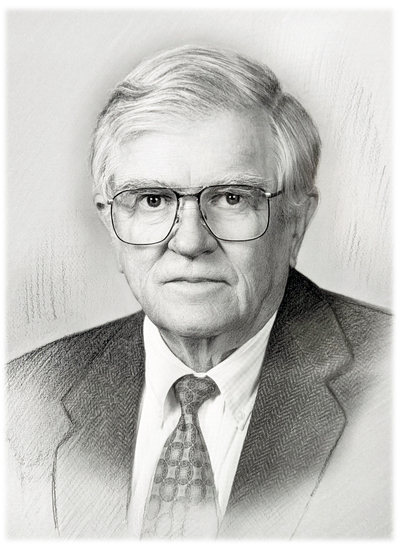 As a lifelong leader and resident of Sioux Falls, Henry helped to shape South Dakota. For nearly 60 years, he was a leader in the construction industry and the community. During his 45 year presidency of the Henry Carlson Company, he oversaw the construction of notable structures in the community, including the Joe Foss Field Terminal Building, many buildings in the Sanford Hospital complex, the Minnehaha County Courthouse, the Sioux Falls Arena, and more. He also worked to make South Dakota a better place to live and raise a family through his active community, charitable, and political service.

Henry was elected to two terms in the South Dakota State Senate and took pride in the work he did to serve his home state. He served in leadership positions in many business organizations throughout his career, including the South Dakota AGC, the AGC Education Foundation, the Great Plains Chapter of the Federation of Independent business South Dakota Chapter, the Minnehaha County Republican Finance committee, and the American Institute of Contractors. He was proud to have been a founding member of the Ramkota Companies in 1965, along with the Kelly Inns Ltd. and Regency Hotel Management company. His membership in the Lions Club, The Masons, the Sioux Falls Area Chamber of commerce, Forward Sioux Falls and Calvary Cathedral Episcopal Church were also important to him.

In 2004, he was honored as the first recipient of the Small Business Champion Award of the NFIB’s South Dakota Chapter. He was named the 2006 “executive of the Year” by the Sioux Falls Sales and Marketing Executives organization. In 2009 he was inducted into the South Dakota Hall of Fame.

In his personal life, Henry was the youngest child and only son of Swedish immigrant parents Henry Gustaf Carlson and Anna Nilsson Carlson. Sisters Vera and Velva were 13 and 18 years older so he grew up like an only child. From his parents, he learned fairness and a strong work ethic, which he passed on to his own family and his company later in life.

After graduating from Washington High School in 1943 he enlisted in the Army Air Force to fulfill a dream of becoming a pilot. While serving, he studied at Lafayette and Amherst colleges as an alternate appointee to West Point. After WWII he was discharged and studied Civil Engineering at the University of Colorado. He enjoyed his college years and was a member of the Phi Delta Theta fraternity. However, as man of action and never the most dedicated student, Henry decided to leave college to begin working without finishing his degree. He gained experience in construction companies in both South Dakota and California before coming back to the family firm, becoming president upon his father’s death.

While working in San Francisco he met Eleanor C. Daunis, who would become his wife for the rest of his life; they married in December, 1957. They moved to Sioux Falls so Henry could continue his work at the Henry Carlson Company. They raised their children, Henry III “Chip” and Kim, and his daughters Linda and Christie from his first marriage to Emma Lou Wivell, in a country house outside Sioux Falls near Brandon. Henry enjoyed the outdoors all his life, and spent many hours hunting and with his horses and property.

With his wife Eleanor, Henry found a love of travel. At her suggestion, he traveled in Europe for several months to see the world before their engagement. Together, they enjoyed many more years of traveling all around the world. They were able to visit places inaccessible to most Americans at the time, such as Berlin, Warsaw, Leningrad, and Moscow while they were still behind the Iron Curtain in 1976, much of Asia, Antarctica, and the Amazon, among many others.

Visitation with the family present will be from 4 to 6 pm on Monday, July 18, 2022, at Miller Funeral Home, 507 South Main Avenue. A funeral service will be held at 11 am on Tuesday, July 19, 2022, at Calvary Episcopal Cathedral with burial at Woodlawn Cemetery.

In lieu of flowers you are welcome to donate to the Sanford Children’s Hospital, the Lions Eyebank, or he Henry and Eleanor Carlson Fund at the SFACF, or the charity of your choice. View the full obituary.