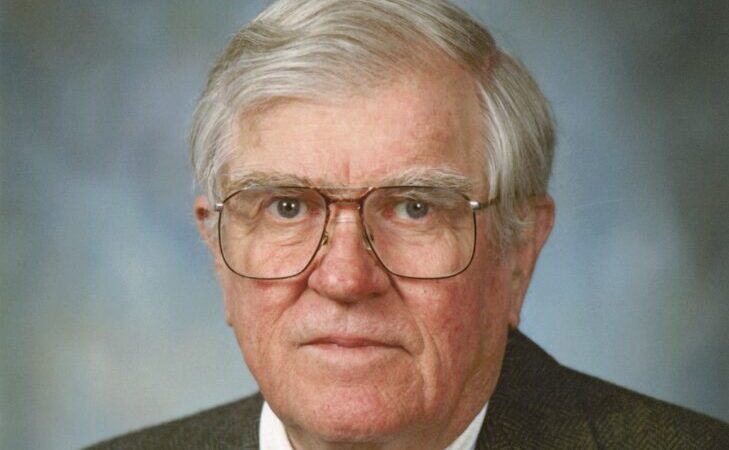 Henry Carlson Jr., who grew his family construction business into a regional leader, died July 14 at the age of 97.

During his 45-year presidency of Henry Carlson Co., he oversaw the construction of key community buildings, including the Joe Foss Field Terminal Building at the Sioux Falls Regional Airport, many buildings on the campus of Sanford USD Medical Center, the Minnehaha County Courthouse and the Sioux Falls Arena. The company also has served as the general contractor on numerous Walmart and Sam’s Club stores across the region.

“He also worked to make South Dakota a better place to live and raise a family through his active community, charitable and political service,” his family said in his obituary.

The youngest child and only son of Swedish immigrant parents Henry Gustaf Carlson and Anna Nilsson Carlson, he graduated from Washington High School in 1943 and enlisted in the Army Air Force to fulfill a dream of becoming a pilot. While serving, he studied at Lafayette and Amherst colleges as an alternate appointee to West Point. After World War II, he was discharged and studied civil engineering at the University of Colorado before leaving to enter the construction industry. He gained experience at construction companies in both South Dakota and California before coming back to the family firm, becoming president upon his father’s death.

Henry Carlson Sr. started the business in 1919 when he joined William Snitkey to form Carlson-Snitkey Construction, buying out his partner five years later to form Henry Carlson Co. By the 1930s, the company was considered one of the largest building and construction companies in the state of South Dakota.

Carlson Jr. was elected to two terms in the South Dakota Senate and served in leadership for the South Dakota AGC, the AGC Education Foundation, the National Federation of Independent Business South Dakota Chapter, the Minnehaha County Republican Finance Committee and the American Institute of Contractors.

He was a founding member of The Ramkota Cos. in 1965, along with Kelly Inns Ltd. and Regency Hotel Management.

When Carlson was inducted into the South Dakota Hall of Fame in 2009, the organization said:

“Henry Jr. has always taken a personal interest in each project. His general oversight and involvement assured that each project received the personal attention it deserved. His main objective was that every project would receive the highest priority in terms of attention to detail, service, quality, the right personnel and equipment resources.”

It quoted Carlson as saying: “The philosophy of finding the right people and doing everything you can to retain them has been a hallmark of the company.” View story.