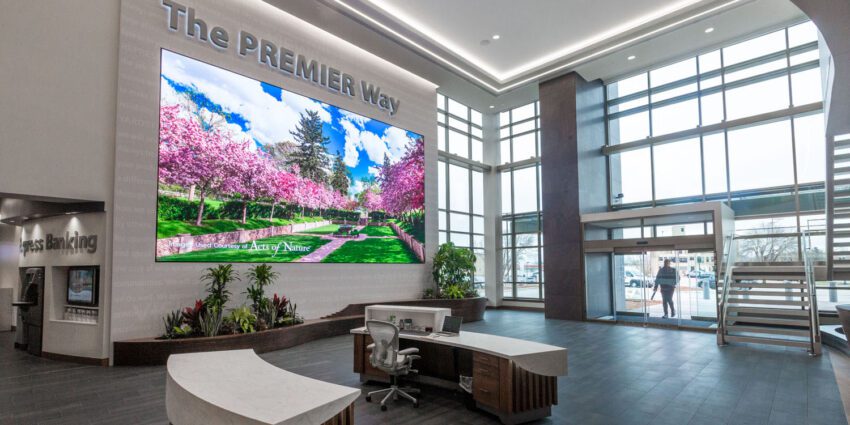 There’s seemingly not a bad view in the entire five-story building.

And that’s by design.

“We were moving from a building with very few windows, so the opportunity was there to bring the outdoors in and create a great working environment for our employees,” said Dana Dykhouse, CEO of Sioux Falls-based First Premier Bank. 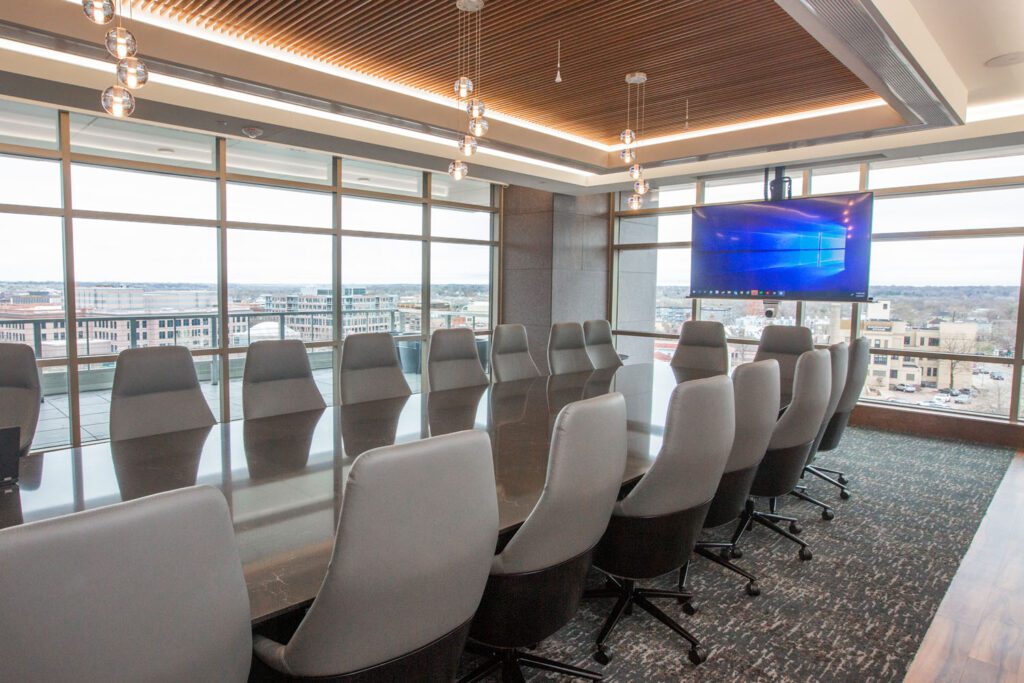 The 77,000-square-foot building will hold about 135 employees when it opens today, with the capacity to grow by about 25 percent. 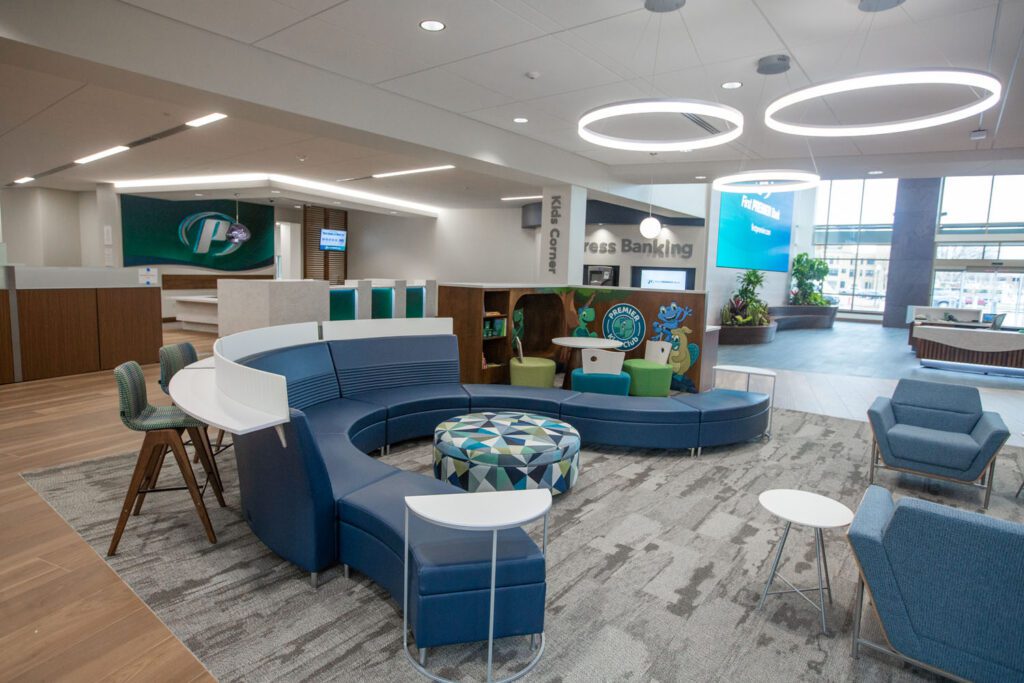 “It’s for our employees,” president Dave Rozenboom said. “We’ve enjoyed a lot of success, and this is a great opportunity to think about the future and what that might be, and this building provides that energy to carry us forward.”

They’re not moving far – just across 14th Street and Minnesota Avenue to the northeast corner – but the building itself might as well be a world away. 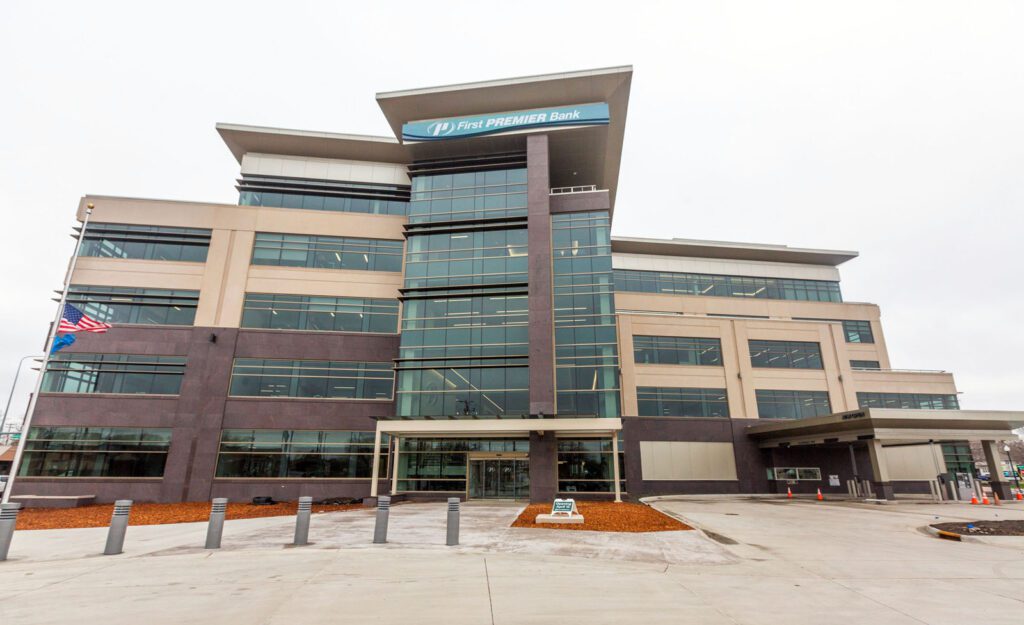 There are panoramic views of downtown and the surrounding neighborhoods, public spaces to host larger gatherings for the first time in the bank’s history and on-site training opportunities. 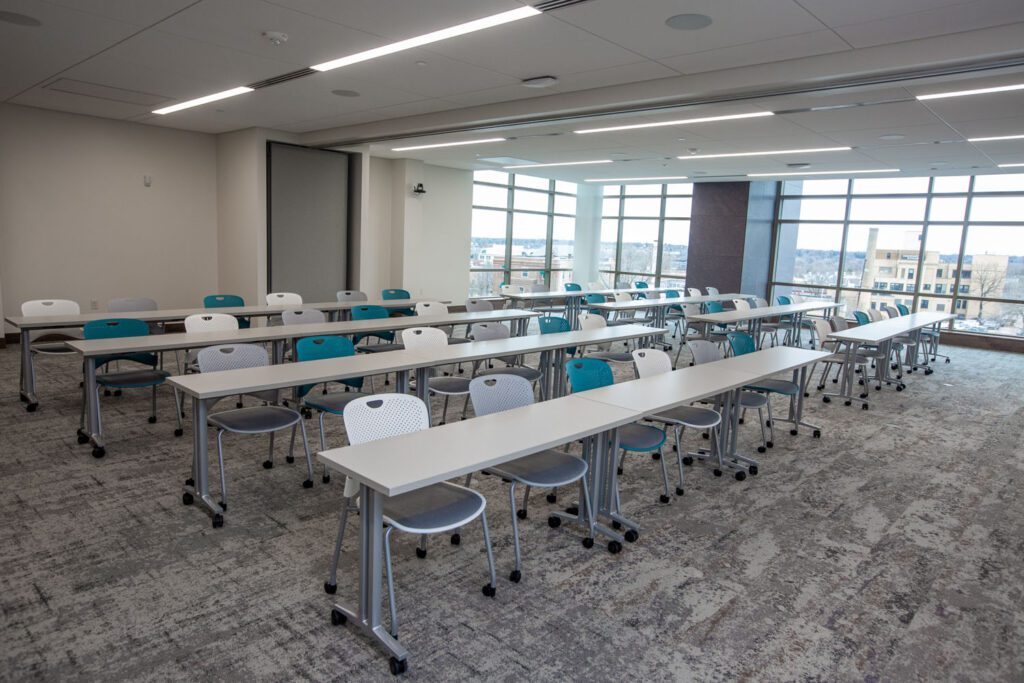 “Certainly while we considered it for a long time and looked at a lot of locations, the term ‘gateway to downtown’ would describe why we were excited about the spot. It was a lot that desperately needed redevelopment, and I think we accomplished both those things,” Dykhouse said. 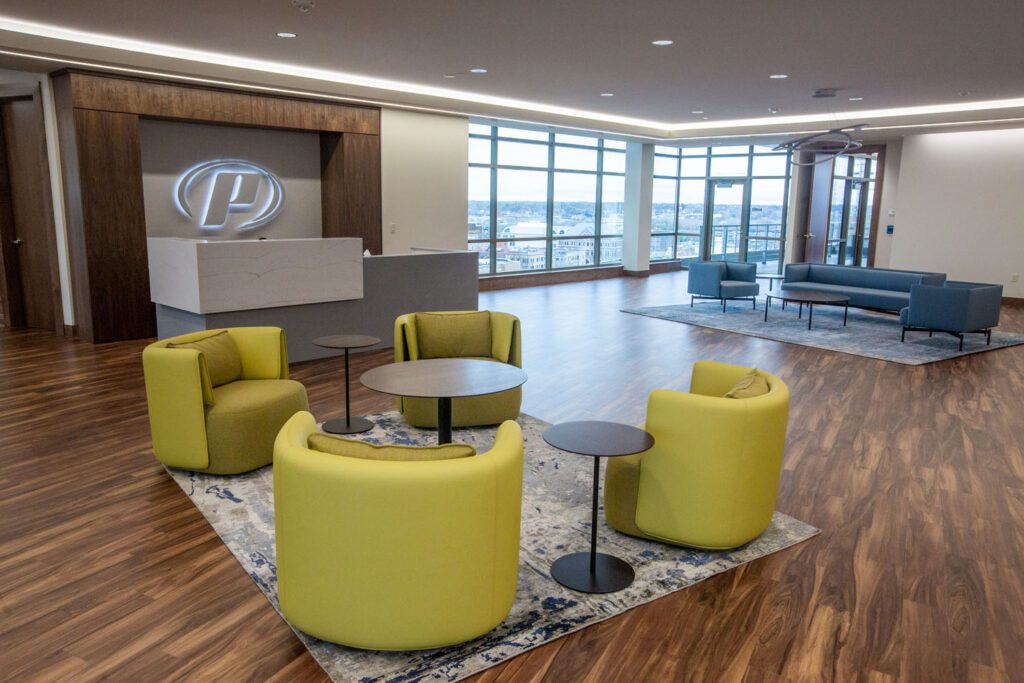 “It will not be just the bank. The lobby will be used for a lot of public events, plus our own variety of events. We’ve always had an emphasis on training, leadership and staff training, and we really have a state-of-the-art training room in this facility.” 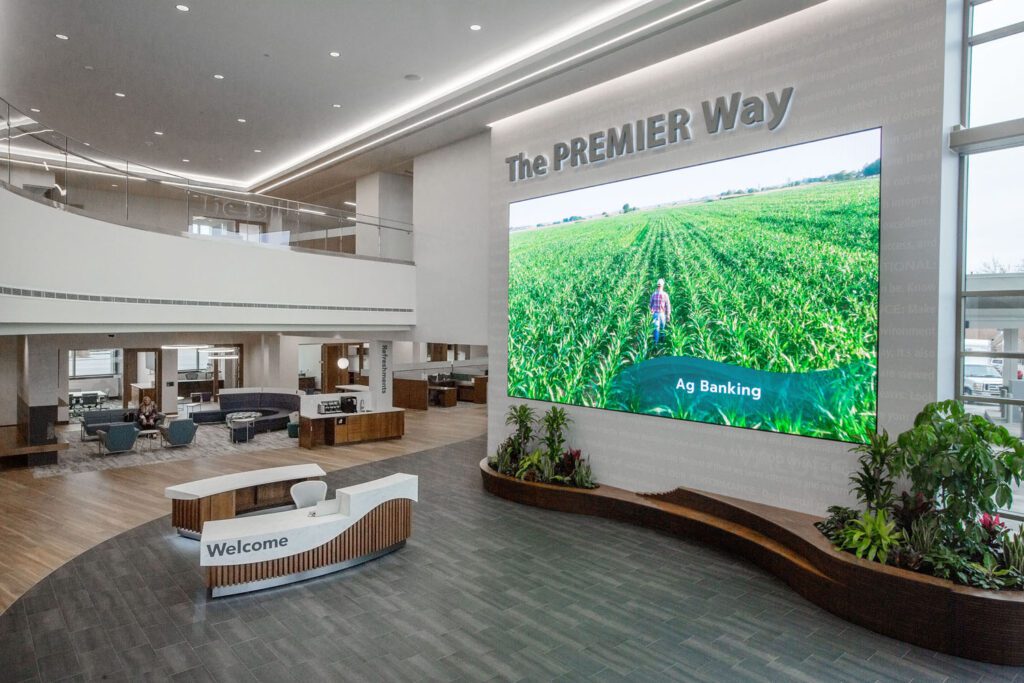 The new building also represents a coming together for bank employees who for years have been split up among various locations around the city.

“In 1995, we were about $200 million in assets, and we had a lot of departments in the bank building, and 26 years later, we’re a $2.9 billion bank, and we spent the last 25 years moving people out of the main office,” Rozenboom said. 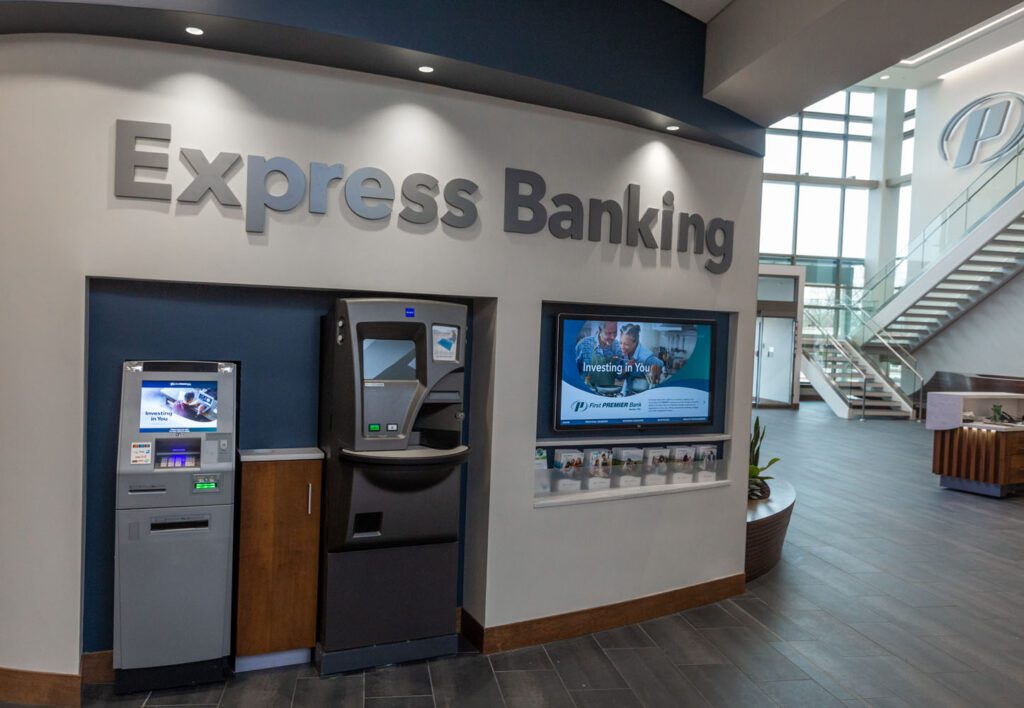 “And we get to spend this year moving people back into our main office and (experiencing) the synergy and convenience for employees and customers.”

Architecture Incorporated was the architect, and Henry Carlson Construction was the general contractor.

The pandemic “changed their workflow on a building project like this dramatically,” Dykhouse said. 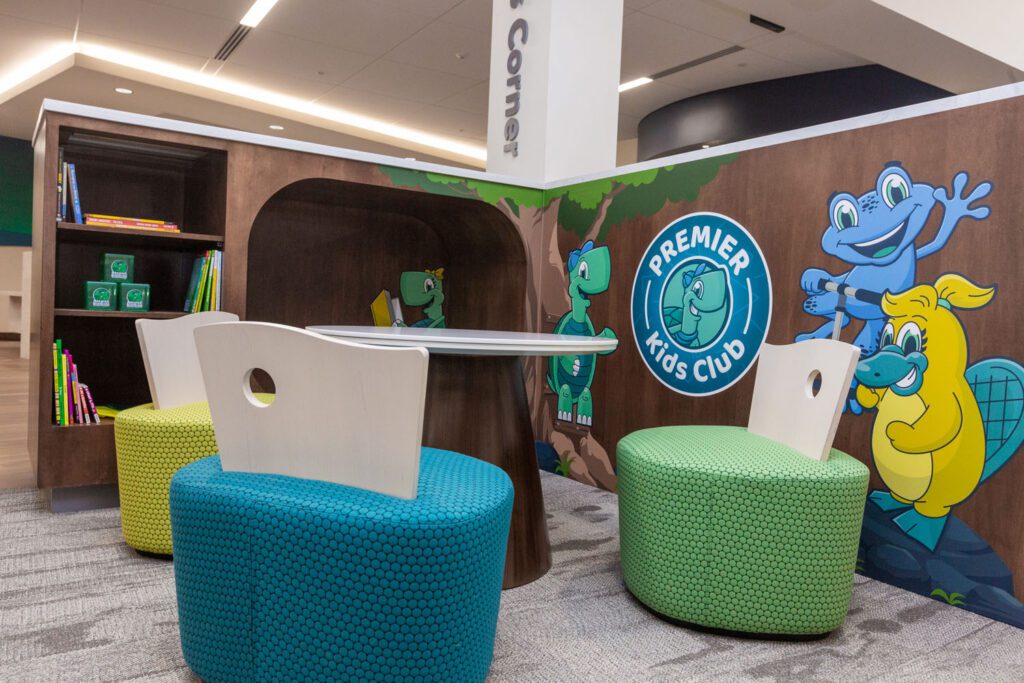 “They went from doing one floor at time to spreading subcontractors out throughout the building, so it was quite an accomplishment.”

While the headquarters was being built throughout the past year, the bank was navigating the pandemic.

“It’s easy to say it now, but we had no idea going into this,” Dykhouse said. “There was no playbook, but I think the transparency, extensive communication and relying on health care professionals is what got us through.”

The first few weeks, a pandemic disaster recovery team met frequently on everything from the supply of disinfectant to how to handle the inevitable first COVID-19 case. 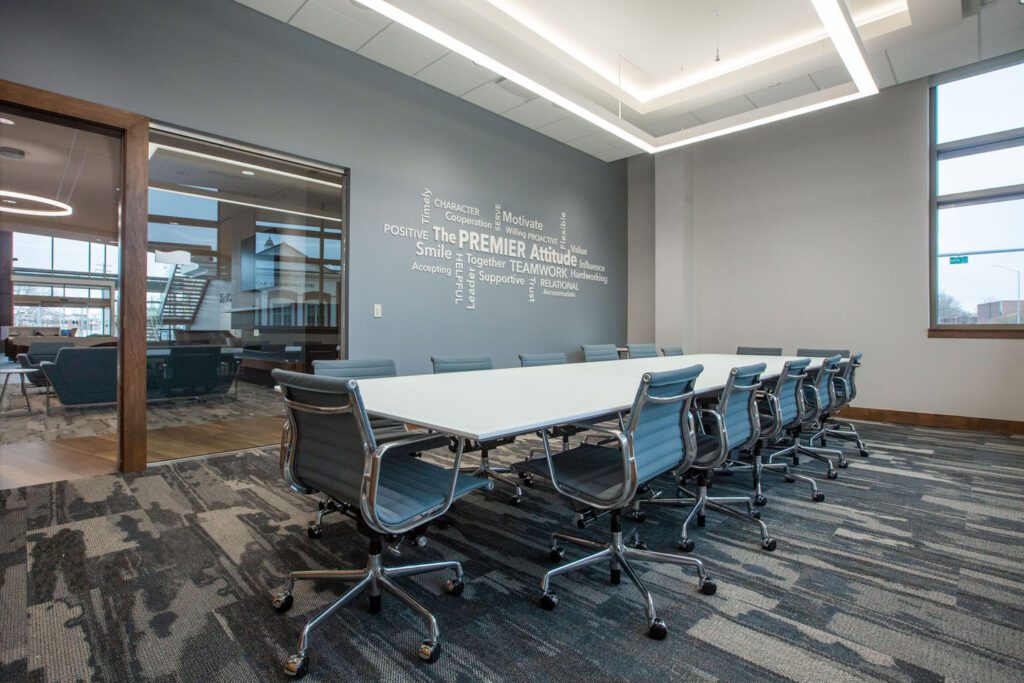 The bank’s leaders liken it somewhat to the time they went through more than a decade ago when federal changes forced Premier Bankcard to go from 3,000 to 1,200 employees.

“That was a difficult time, and this was a difficult time, but what we learned is communication is key, “Dykhouse said. “Dave, Miles (Beacom, CEO of Premier Bankcard) and I every week would send an update of what was happening, what we were doing, what our plans were and what percent of people were at home.”

They also met regularly with health care provider Sanford Health and arranged podcasts and live Zoom meetings for employees to put the pandemic in perspective.

“We wanted the credibility of our health care provider,” Rozenboom said. “So we weren’t making decisions based on what is best for the business but decisions founded in being safe for employees and customers, and that earned a tremendous level of credibility and confidence.” 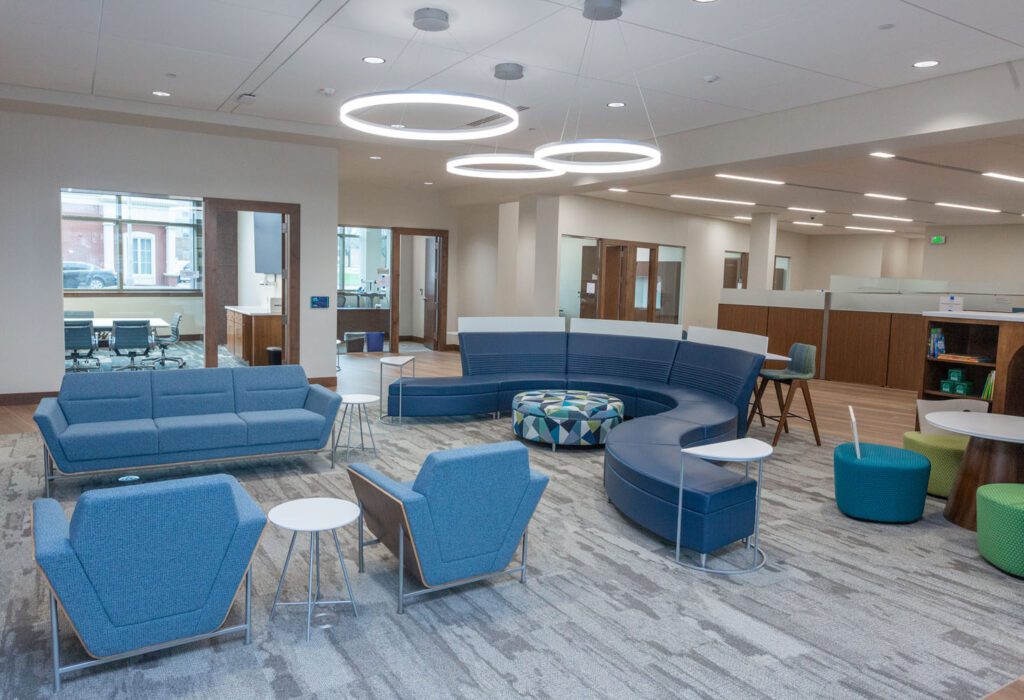 In designing the new office, some adjustments were made to workstation heights, and all employees were given laptops to facilitate working from other locations as needed.

“We won’t have people we’ll send home and they’ll be there forever, but they will have flexible schedules,” Dykhouse said. “Many people during COVID wanted to get back in the office and see people but have more flexibility than we had in the past.” 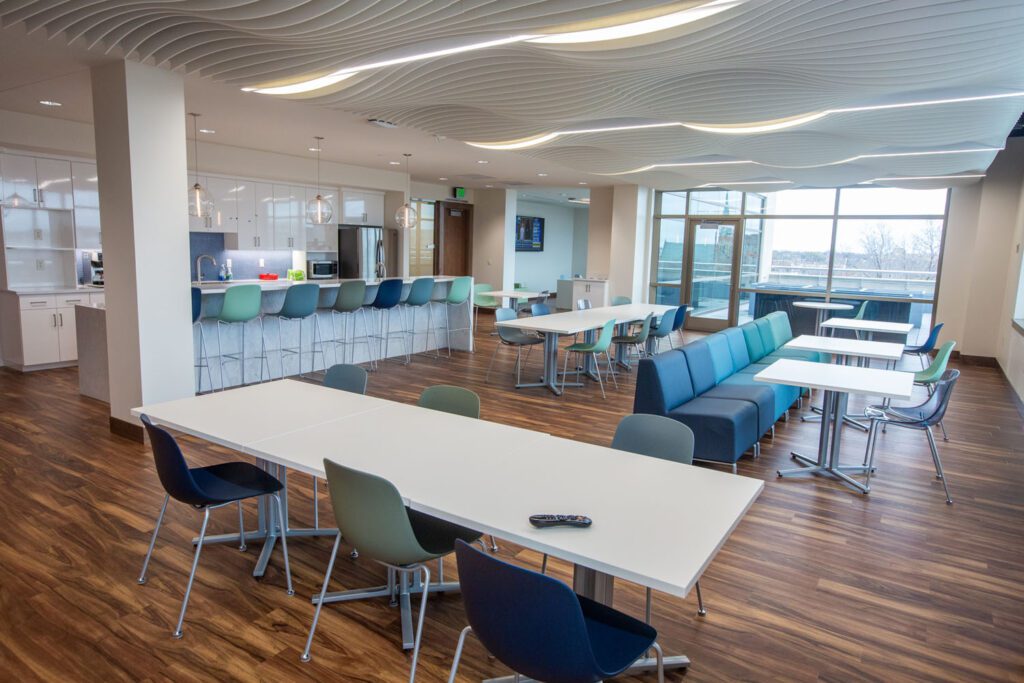 Employee break areas also offer multiple spaces to work away from the desk or disconnect. 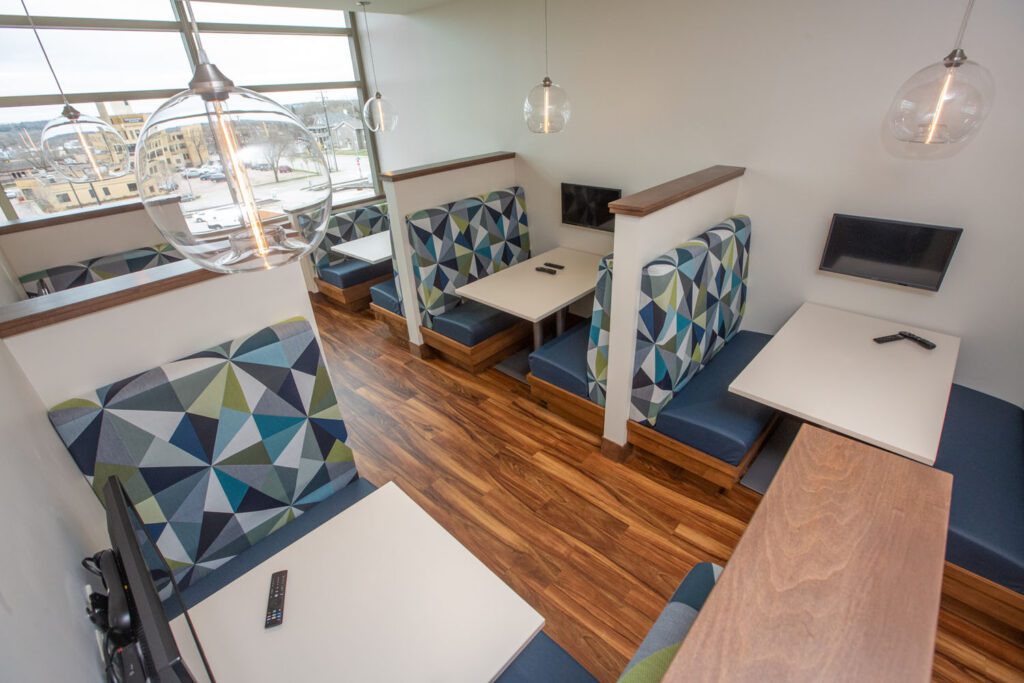 “I’m really proud of our staff,” Rozenboom said. “We all went through that period of time and those emotions when the pandemic was first coming, but as we settled into the year, employees took personal responsibility and managed to their situation, and there was great teamwork.”

2020 ended up being “a surprisingly strong year financially for us and most of our customers,” Dykhouse said. “A few have been adversely affected, the fine dining and hotel-motel industries, but most customers have done surprisingly well.” 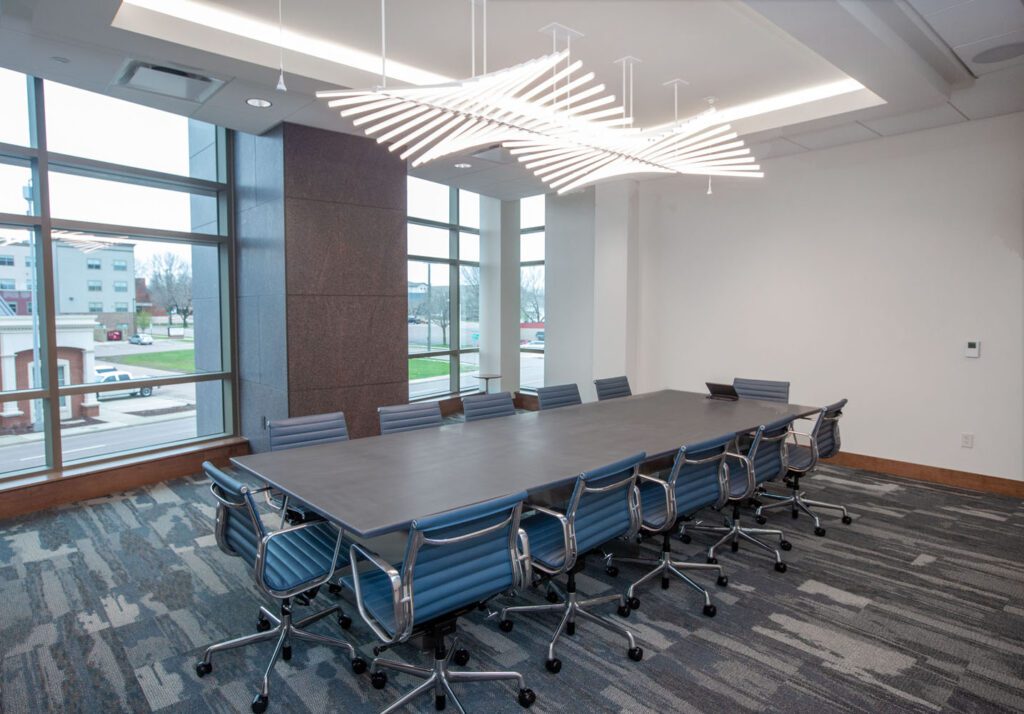 The bank’s mortgage department saw triple the business it has ever done in a single year, and helping administer the Paycheck Protection Program for a number of businesses also kept the staff “extremely busy,” he continued.

“And I think the growth of Sioux Falls, even though it was a pandemic year, it was an unprecedented year for growth in Sioux Falls.”

The former headquarters on the southwest corner of 14th and Minnesota is on the market. Someone who could assemble multiple parcels could find added opportunity there, Dykhouse said.

“That corner has tremendous potential,” he said. “There’s a lot of land and a big parking area.”

At the new location, a ribbon cutting is scheduled for 4 p.m. June 8 with a Greater Sioux Falls Chamber of Commerce mixer to follow. 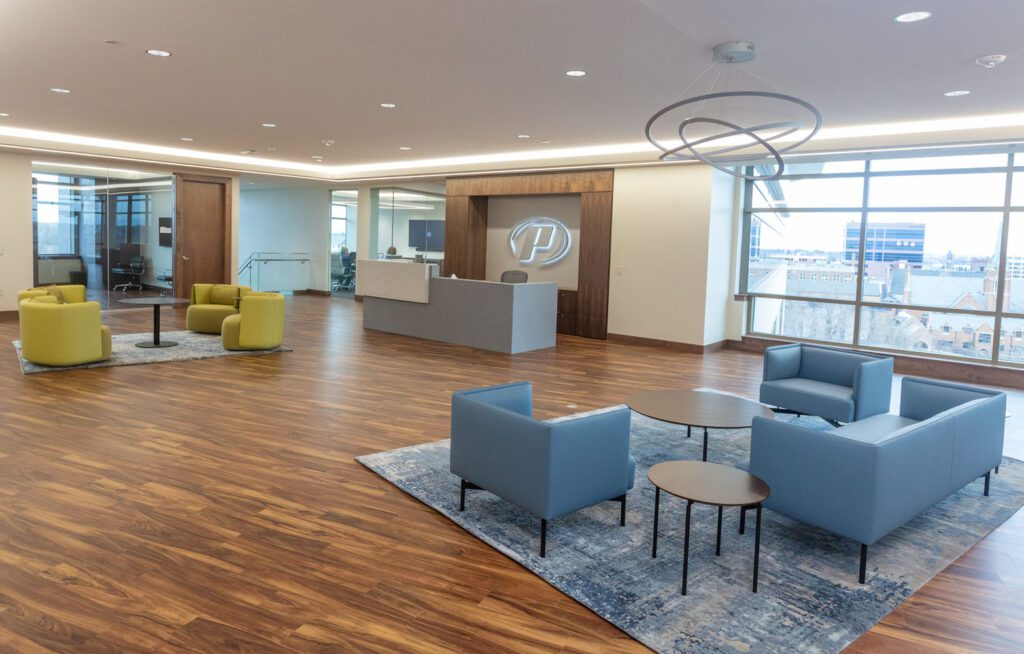 Before that, though, the bank will hold an open house for retirees, recognizing several dozen longtime employees who combined have more than 1,400 years of service.

“They literally are the foundation of this building,” Rozenboom said. “I just think this is good for Sioux Falls. We continue to experience growth and diversification of our economy and just great success. It’s another chapter in the book of Sioux Falls as we continue to lift ourselves up as a community.” Read the story.