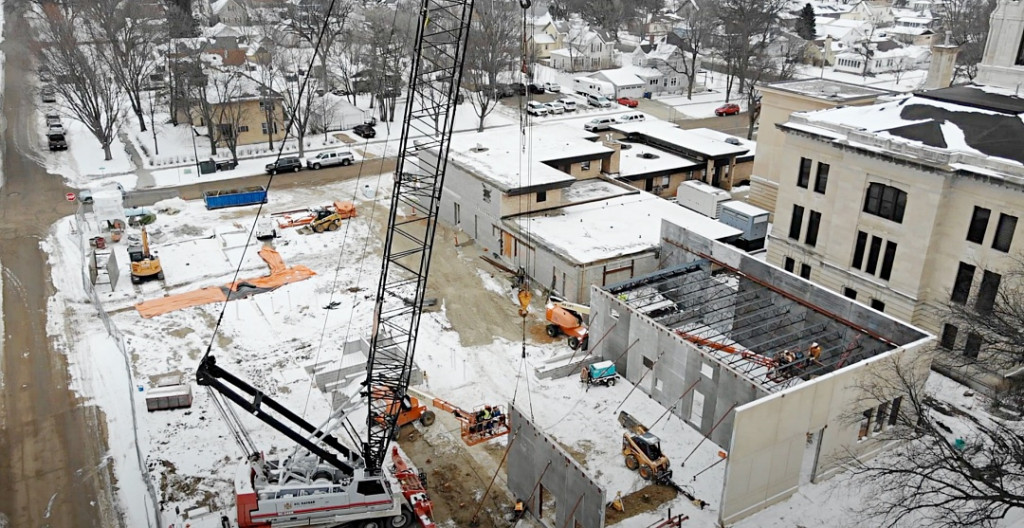 Courtesy photo: Above, drone footage of the Brookings County Detention Center expansion from Feb. 2 shows a crane moving one of the precast walls into place. The walls are then secured by steel support beams and welded into place. The jail’s addition is set to be finished in late August. Then the original jail will be renovated starting in October. Below, the jail expansion is starting to get part of its roofing in place. Jail Administrator Bart Sweebe said that there was a slight delay with some of the walls, so the construction crew pushed forward with getting a roof on so that parts of the interior could be worked on in the meantime.

BROOKINGS – Brookings County Detention Center construction has been underway for just a few months now, but significant progress has been made in that short amount of time.

The jail’s addition (where the drop-off parking area, basketball court and green space were to the north of the original building) is set to be finished in late August of this year, and renovations to the current jail building will begin in October.

The guaranteed maximum price for the jail expansion project is estimated at nearly $15.1 million, and soft costs could add another $2 million.

“Things are doing well. It was nice to get the north face back on the wall because they tore that section off to get that prepared to be attached to the addition. So they had to strip off the outer surface which made our wall half the width that it was – and for this time of the year it made things rather chilly,” Sweebe said.

“They didn’t weaken it enough for any escaping,” Stanwick joked.

“They put the wall back onto the existing wall now. The precast walls – they’ve got enough in there now that they’re going to get some sort of roof covering coming to replace the one they’ve currently got up. They’re going to start getting some concrete poured soon to make the floor – poured into the kitchen and the booking area of the addition – and then they can start working on more of the fine details of that area,” Sweebe said.

Sweebe said the next set of walls are supposed to come this week, and they’ll continue with the northern part of the precast walls.

“The next big event for us, which will be something really neat to watch, is when the detention cells come in. That is slated for April 19, and that’ll be when the actual cells come in,” he added.

The walls are precast, meaning that they are made off-site and installed like vertical puzzle pieces. The jail cells are also premade from a company in Texas. The steel cubes are stacked on top of one another when installed.

Sweebe said an east-side section of wall will be left out of the addition, with the cell cubes going through that opening.

“They’ll roll them over into place and stack them up however they need to be stacked up,” Sweebe said. “Kind of like Legos, but you’ve got to put them together in a confined space.”

“I think we’ll see things progress along pretty quickly but mostly on the inside throughout May, June and July. But by the end of August is when they’re scheduled to be done with Phase One,” Sweebe said.

The plan is to move into the new part of the jail in September, and then workers start the remodel of the existing facility in October.

“We’re wanting to put inmates in the expanded part sometime in September,” Stanwick said. “It’ll give us some time to get used to things, too, we’ve got to look at how staffing and management and so on will all really function with it. There’s going to be some increase in staff, but we just don’t quite know how much at this point.”

The jail has been functioning well amid the constraints caused by construction.

“We had to heighten security in the lobby area just because arrests come through there, but otherwise it’s been relatively easy,” Stanwick explained.

“Knowing that things will be like 120% better once the renovations and construction are done, it makes the little inconveniences that much easier to deal with,” he added.

Stanwick and Sweebe said no changes or modifications to the design of the jail have been made. Part of the agreement that the City of Brookings made with Brookings County when dropping its lawsuit last fall was that the County adhere to its plans and could not change anything that had been approved by the County and the architect.

On Feb. 2, Stanwick and Sweebe presented an update to county commissioners on the jail construction and staffing. They also briefly showed some drone footage of the construction from an aerial view.

“I’ve got to make sure that my staff is trained, policies have got to be changed – policies are going to be different from the old jail to the new jail…” said Stanwick at the County Commission meeting.

Stanwick said he is working with Brookings County commissioners on identifying an exact amount of staffing needed for the new jail, as the addition will require several new hires. View the story at the Brookings Register.