Sanford Health plans to invest nearly $210 million in building projects in the Sioux Falls area over the next few years.

They include major upgrades on the main campus of the Sanford USD Medical Center, including an orthopedic hospital more than a decade in the making.

They also will build on Sanford’s neighborhood-focused strategy of bringing care close to where people live, with developments on the east side of Sioux Falls and in Harrisburg that include new Lewis Drug stores.

“We’ve talked about this for years. We’ve built up service lines and invested in people and invested in buildings in the past, but we’ve never taken our eye off the ball when it comes to being the provider of choice.”

Nearly three-quarters of the estimated $209.5 million in projects will go toward the orthopedic investment. It will start with a two-story, 33,000-square-foot expansion of the Van Demark building on Sanford’s main Sioux Falls campus starting this fall and opening in spring 2022. That will add 23 exam rooms and space for eight additional surgeons and 12 advanced practice providers.

Construction of an adjacent 163,000-square-foot Sanford Orthopedic Hospital will start next summer and is scheduled to open in 2021. It is designed for same-day surgeries and includes 12 operating rooms with space to expand, plus a walk-in clinic.

Sanford has drawn on input from its physicians in putting the concept together and will be sending a committee to evaluate other new facilities in the marketplace, Hanson said.

“For me, it’s designing as the building for 2030 or 2040. It’s not designing for 2000 or 2010, so where is ortho going? We’ve had a very active building committee and strong support and engagement from the medical community in its design, and we’re going to flow through with that,” he said. 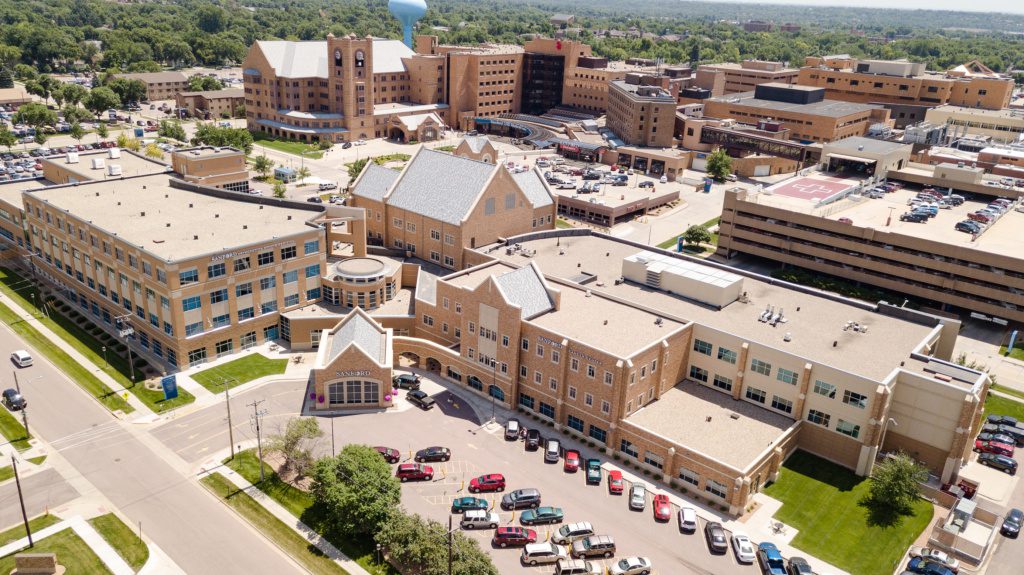 Sanford has talked about a standalone orthopedic building for 14 years, he estimated. Some physicians have been involved that long, and others in more recent years have helped with “recruiting the right people first before we build a building and developing a team we can respect and work with,” he said.

The plan is to recruit an additional eight to 10 physicians in the immediate future, he said.

“For me, to see the physicians who sacrificed and built their practices up and recruited additional people … here we are 13 or 14 years later and we’re executing on that original game plan. I’m just really happy for our docs. They’ve earned it.”

On the main campus, Sanford also will be adding to its Heart Hospital, which opened with 56 beds in 2012. The expansion will add more than 26,000 square feet, including 16 patient rooms and supporting spaces. Construction will start this month and be done this year.

“It’s just volumes. Our volumes have grown such that we look at the need internally, and we had to make additional investment,” Hanson said. “Fortunately, we have shelled that space out in the project before, so it’s a matter now of determining the best use of the space.”