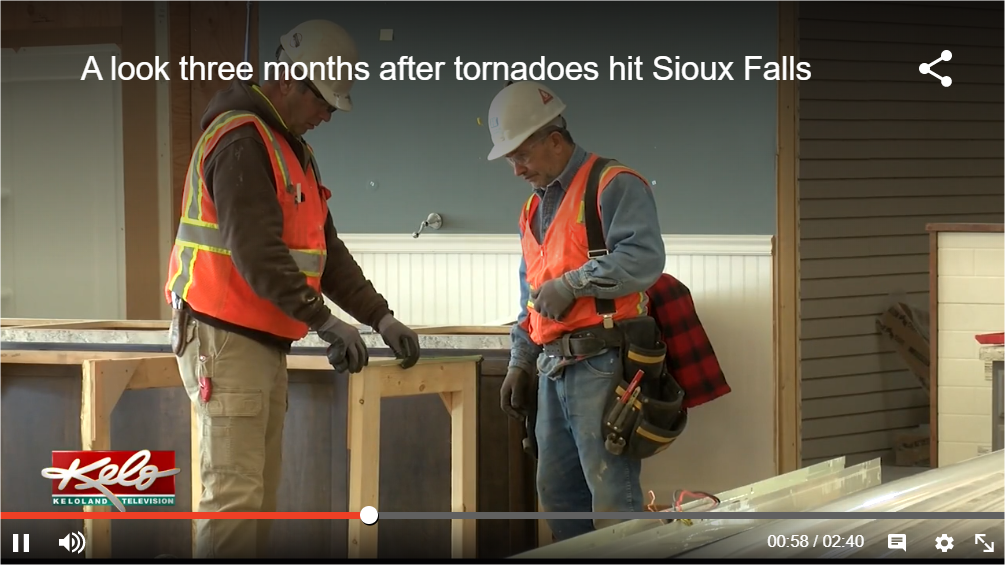 It’s been just over three months since three tornadoes devastated Sioux Falls. A lot of work has been done to get things back to normal, but it’s still not quite done yet.

Pretty soon this business will once again operate out of its 10th Street location.

“It’s been going great. We got a roofer right away; Guaranteed Roofing. They’ve done a great job. General contractor is awesome; it’s fun working with them,” president Joe Swenson said.

Just over three months ago, the storm hit this business hard.

“Straight-line winds hit and caved in part of the structure through the roof, so bar joints to the ground, and the masonry to the ground and then in this corner it blew the roof off, and ended up in the alley. So, we had two big damage portions, and rain and debris, broken glass and things like that,” Swenson said.

The business wasn’t the only spot hit hard. After three tornadoes damaged homes and businesses, city officials say they’re happy with how the community responded.

“I think the most significant number to me was the community response and how many people actually volunteered. We had almost 3,000 calls to the Helpline Center for people requesting assistance or saying they’re willing to help,” Mayor of Sioux Falls Paul TenHaken said.

“The city really came together under the incident command system, city resources, contractors, volunteers, the residents, and in most of the areas in the city, you wouldn’t know that anything happened,” Sioux Falls emergency manager Regan Smith said.

While there is still some work to be done, Swenson says he’s happy they’ll be moving back to the 10th Street location in the beginning of 2020.

“We have great employees, and these contractors are great. The employees are great; it’s fun working with everybody, so it’s not all bad,” Swenson said.

TenHaken adds that 500 Xcel Energy employees restored power to the community. Plus, city employees worked over 10,000 hours on the response.

You can still go to Handy Man at its 18th Street and Cliff Avenue location.